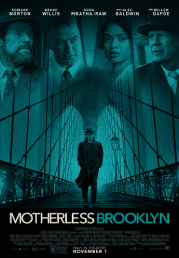 In 1950s New York, Lionel Essrog is a lonely private detective afflicted with Tourette’s Syndrome, trying to solve his friend’s murder. Armed only with a few clues and the powerful engine of his obsessive mind, Lionel unravels closely-guarded secrets that hold the fate of the entire city in the balance.

GO BACK TO MOVIES